What would the late Atal Bihari Vajpayee do in today”s tense political atmosphere where the treasury bench quickly alleges that the opposition gives cushion to “Pakistan narratives” and the opposition loses no time to call the government of the day “liars”?

The current dispensation loves to take digs at India”s first Prime Minister — Jawaharlal Nehru. Former Prime Minister Vajpayee, whose 95th birth anniversary is being celebrated on Wednesday, too was unsparing in his criticism of Nehru, but respected the high office Nehru held.

Vajpayee once remarked, “I know that Pandit Ji practices shirshasana and is welcome to continue doing so, but this does not mean that he should look at issues with an inverted vision.”

But he never crossed the line. Unlike in today”s polity where Rahul Gandhi alleges “Chaukidar Chor Hai” (the watchman is a thief) while referring to the alleged Rafale scam, Vajpayee would recount his political adversaries with utmost fondness.

Vajpayee had once said on the floor of the House: “Not that I never had a disagreement with Nehru. Once I told him, ”you have a mixed personality which has shades of Churchill and Chamberlain.” He didn”t get upset.

“When I met him on a banquet that evening, he had remarked, ”Your speech today was feary”. Then he left with a smile. To indulge in such discourse today is inviting enmity.”

In his famous address to Parliament after the Vajpayee-led government had lost the vote of confidence in 1996, the BJP stalwart had said: “These power games will go on. Governments come and go. Parties appear and disappear. But this country should remain and its democracy should remain eternally.”

Contrastingly, neither today”s polity, nor its discourse values the Vajpayee-esque philosophy of disagreement without being disrespectful.

In December 2015, when officials from the Central Bureau of Investigation (CBI) raided Delhi Chief Minister Arvind Kejriwal”s office, the Aam Aadmi Party leader had taken to Twitter to claim, “Modi is a coward and a psychopath.”

In more recent times, Shiv Sena”s Sanjay Raut wrote in the party”s mouthpiece Saamana in November: “You have to acknowledge that Hitler is dead and the shadow of slavery has ended when the threats of fear do not lead to government formation.”

As the nation celebrates Vajpayee”s 95th birth anniversary with leaders paying token respect, it”s more important to remember the man”s legacy — soft spoken yet sharp, a poet who took a call on making India a nuclear nation, a former Prime Minister who valued his opposition, and as a young opposition MP who never disrespected the post of the Prime Minister.

Many BJP leaders of yesteryears who worked with him insist that Vajpayee often used to say, “Victory and defeat are parts of life, which are to be viewed with equanimity.” Probably this humility alone helped him run a 23-party coalition government for full five years.

Vajpayee may be gone, but his ideals are here that today”s polity — both the government and the opposition — desperately need to follow in this time of animated disagreements and name calling.

(With the inputs of agency). 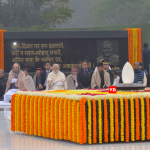